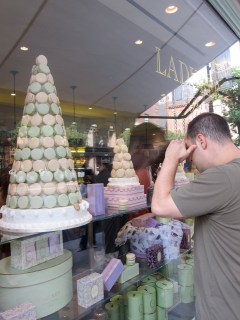 Lauduree, the premier French macaroon shop in Paris opened it’s first North American outpost on Madison Ave just last week.  The lines were long Day One.  And when we were in the neighborhood on Saturday I suggested we just run by since we were only 2 blocks away.  Run by.  Run in.  Just sample a few.  No way, not with this line.  So we longingly looked in from the sidewalk.


I love the couple at the front of the line to get in.

So, will try again since the office is not that far.  And I’ll provide the full report on French macaroons.  Of course, we had the discussion that they all taste good.  Which I can’t disagree with, frosting sandwiched between meringue cookies is great, no matter where it’s from.


Until then, here are macaroon posts from earlier this year.  As you can see, I do try and sample them around town:
April 2011:  Macaroon Cafe on 59th Street
January 2011:  Bisous Caio on the Lower East Side

3 thoughts on “Macaroons at Laduree: Attempt #1”