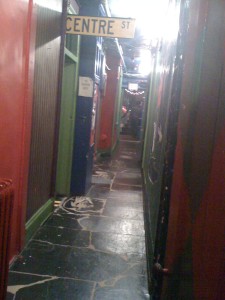 I am always up for seeing something new, something I may not have seen before. So was more than ready to go along last weekend for an art exhibit at the Carlton Arms Hotel. Art on a Friday night? Sounds great! I like to introduce culture into my life, especially when our friend, Amy, invites us (She is Ms. Brooklyn art scene and works at Sotheby’s).
After a varied past, it became a respectable hotel in the 1950s, but not for long (according to the website). After a period of Single-Room-Occupancy, it became a home for hippies, transvestites and hookers.
A new owner took over in the 1980s, and the rooms were scrubbed, cleaned and rented out to travelers and transients looking for something not so hip, but at a good rate. It started with a mural on one wall, and then one by one artists were invited to paint rooms.
Today, all 54 rooms and 4 hallways are fully painted with colorful scenes. This event celebrated the opening of 3 more rooms (the event was entitled Artbreak Hotel Unconscious Artmess and is held about twice a year). There was actual artwork being created and live music.
Here is a picture of NYC on a wall:

A new room opening last Friday night. Yes, that is a little sink in the corner:

And a look down the staircase. Yes, everything is painted!

It was a very artsy crowd, if I can describe it that way. A mix of a art opening and real life living. It was definitely interesting to see, and the owner was very cool and clearly loved what he was able to do. I will admit that when I first walked around, I thought I was in someone’s house and wasn’t quite sure what was going on. There was shampoo out for the shared bathroom and someone going into their room that I was standing in front of.
Just a little bit of exploring new places in New York….we mixed this event up with a little CPK that night. Yes, crazy, but it is the one place you can go and there isn’t a line on a Friday. It was really a little bit of a treat to walk right in and be seated.

One thought on “The Carlton Arms Hotel & Artmess” 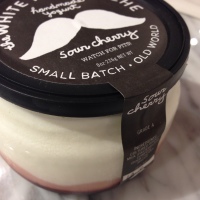